Galloway N.J. _ Three Stockton alumni will be honored during University Weekend at the Distinctive Alumni Awards Brunch at 11:30 a.m. Oct. 8 in the Campus Center Event Room. 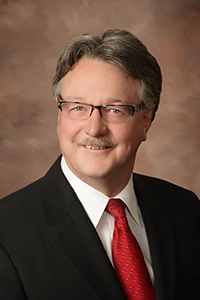 Hurley became the ninth President of the University of Mary Washington in Fredericksburg, Va. on July 1, 2010. Hurley has spent more than three decades in higher education, including 10 years at the University of Mary Washington where he served simultaneously as executive vice president, chief financial officer, and treasurer of the UMW Foundation.

Hurley previously served as vice president for administration and finance at Longwood University. He spent four years at the American Association of State Colleges and Universities and served in various positions at several other colleges and universities. Currently he serves as a member of the Board of Directors of the American Association of University Administrators and is past president of the association. He earned his master’s degree from Central Michigan University and also holds certificates from Harvard University and the University of Kentucky.

In the past year Corley has raised almost $12,000 for Covenant House, a shelter for homeless and trafficked youth. She serves on both the New Jersey and New York Associate Boards and in 2017 she received the group’s Killing It Award for her work in New York. She helped form the board in Central New Jersey and each year does the annual sleep-out, where she sleeps one night on the streets to raise awareness of homeless youth. She has also run marathons to raise funds for Covenant House and volunteered at a trafficked youth shelter in Guatemala. 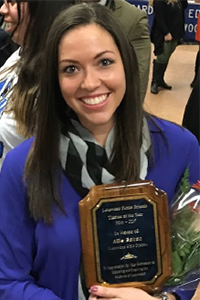 Corley also volunteers with Big Brothers Big Sisters in Asbury Park, works with the Ashley Lauren Foundation, and returns to Stockton each year to work with the Suicide Prevention Team. A Literature and Creative Writing mayor, she writes about mental health awareness and suicide prevention and recently wrote her first book “Before You Leave” which she dedicated to her Stockton professors Tom Kinsella and Nathan Long, “the only ones who told me not to change my major.” A volleyball player at Stockton, Corley also wants to raise awareness of mental health among NCAA athletes.

Bairan graduated with a Degree in Literature and Creative Writing and received the Joseph Courter Fiction Award in 2011 for her story titled “Remi.” Her love for writing spurred many projects including publication in Seascape Literary Magazine, and contributing a chapter for the book, Blood Type: Writ(h)ings in/on True Blood, the brainchild of Dr. Lucio Angelo Privitello, philosophy professor at Stockton University. Before attending Stockton, she earned an Associate Degree in Digital Mass Media from Ocean County College.

In 2013 she began teaching ninth grade literature at Lakewood High School and after three years was named “Teacher of the Year.” She currently teaches seventh grade language arts at Wall Township Intermediate School and is working toward a Master’s Degree in Educational Leadership at Georgian Court University.

The brunch is open to the public. Tickets are $10 per person and $5 for ages 13 and under and are available online at:
Stockton alumni awards brunch.