Galloway, NJ - Student Aimee Balint of Woodbridge learned Braille in high school and is a Braille transcriber. She also works to raise awareness of the federal AIM HIGH Act to provide accessible instructional materials for students with disabilities in higher education.

Balint said while audio books and other technology have helped the visually impaired, learning to read Braille results in much higher literacy rates and more independence.

“When you learn Braille, you are also learning to write grammatically,” she said. “It’s not like listening to a book.”

Balint was just one of some 60 volunteer projects displayed at Fall Civic Engagement Mini-Grant Showcase held in the Stockton Art Gallery. 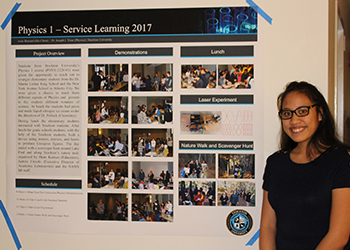 Director of Service Learning Daniel Tomé said the event was an opportunity for students who participated in service-learning projects to celebrate their success.

“This is our largest event so far,” he said, with some 60 teams of more than 150 students participating.

Seven projects received mini-grants. They included students who made colorful posters for the Memory Care Unit at Spring Village in Galloway Township.

“They wanted posters that would be visually stimulating,” said nursing major Sharon Jiang, who displayed some of the 40 colorful beach and animal-themed posters they made. The students also visited and played Bingo with the residents.

Students in the Conservation Biology class made a flier and distributed re-usable bags to try to reduce the use of plastic bags.

Students in the After-School Homework program made displays of their work with students living in Atlantic City housing projects.

Students in the Perspectives on Women class highlighted social and political topics, including the posting of white supremacist fliers on campus, the Richard Stockton legacy, Sanctuary campuses and efforts by the Ku Klux Klan to hold a rally at Stockton in 1988.

Student Josephine Bernard, a bio-chemistry major, recorded the second Physics Day, which brought middle school students from Atlantic City to the university for a day of experiments and tours with university students.

“It was nice to see the looks on their faces when they did an experiment,” said Bernard “It was priceless.”

(More photos from the event can be viewed by clicking Civic Engagement Showcase.)