Margate, NJ - Hanna Ehrlich of Margate hid family photos in the straw in her bunk at Auschwitz.

The late Jadzia (Janet) Altman Greenbaum of Margate hid photos in her shoe.

Both survived the Holocaust, while their family members did not, leaving the photos their only mementoes of a life before the war.

Austrian artist Manfred Bockelmann is giving those and some 140 other children new life through large-scale charcoal portraits he has drawn from photos he receives from family members or discovered during research at concentration camps.

The result is an exhibit and film documentary “Drawing against Oblivion” that tells the story of children who were killed solely because they were Jewish, or Roma, or orphaned, or disabled.

“The most important thing is their eyes,” Bockelmann said during a tour of a new exhibit of 20 of his drawings at the Milton and Betty Katz Jewish Community Center in Margate. “You look at the family photos and photos taken at the (death) camps, and you can see the difference.”

Twenty drawings, including seven who were family members of local Holocaust survivors, are in the new exhibit, which is sponsored by the JCC and the Sara and Sam Schoffer Holocaust Resource Center at Stockton University. They will be on display through Nov. 6 during JCC hours. 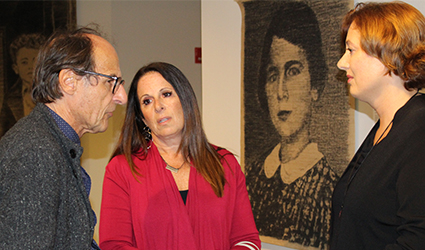 The documentary will be shown at 7 p.m. Oct. 26 at the JCC, 501 N. Jerome Ave. in Margate, followed by a discussion with Bockelmann and his niece Marion Hussong, a professor of Literature at Stockton who has researched the stories of the children in the photos. The event is free and open to the public.

The portraits were first displayed last year at Stockton, where Bockelmann also made smaller versions for the local families. He also drew a large portrait on site as a gift to the JCC, which will hang in the lobby.

“This gave her so much happiness and peace,” Michele Taroff of Margate said of the drawing her mother, the late Ruth Kessler of Ventnor, received of her older sister, Erika Fisch, last year. Ruth was put on the Kindertransport from Vienna to Great Britain and survived. Her sister and mother died in a death camp.

Isaac Ehrlich named his own son, David, after the uncle, David Dov Granek, who died as a child in Auschwitz. David Dov, now forever age 10, was the brother of Hanna Ehrlich of Margate.

“This is our revenge,” Isaac Ehrlich said of the portraits. “Only three or four photos survived. They knew this could be the end and they wanted to save what they could. My mother hid the packet in the straw in the bunk because she knew the Germans would not touch the straw because it was full of lice.”

He calls the drawings from Bockelmann a gift, and a remembrance.

“Every one of these photos is so meaningful,” he said.

Abe Greenbaum of Egg Harbor Township, said he and his sister take turns hosting the smaller portraits of his aunt and uncle, Tova and Yossel Altman, Bockelmann gave them last year.  He admired the large-scale originals at the exhibit, then he and Bockelmann looked at the tiny original photos, now yellowed with age, but still clearly showing young lives bright with promise.

Hussong said Jewish children were not the only ones killed, and those who were came from many different countries. Gypsies, or Roma were also targeted. Children who were sickly or had disabilities were taken to “clinics” where they were given a drug that caused pneumonia, killing them. One drawing is of a two-year-old with Down syndrome.

“The families were just told they died of pneumonia,” Hussong said.

Bockelmann, 74, began the project in 2010, and said he will continue as long as he can.

“The Germans photographed the children and kept records, but a lot of photos were destroyed at the end of the war,” he said. “But photos were important to the families, if anyone survived.”

Bockelmann sees himself in the photos, noting he would have been a child at the same time and could have met the same fate.

“What is important to me is that they were children,” he said.

(The exhibit may be viewed during the JCC hours of operation: Monday-Thursday from 5:30 a.m.-10 p.m., Friday from 5:30 a.m.-6 p.m. and Saturday and Sunday from 7 a.m.-5p.m. Docent guided tours are available for school groups and organizations. For more information on the exhibit and to arrange tours call the Holocaust Resource Center at 609-652-4699.)