“I always consider myself a student first. I’m constantly learning; every day is an opportunity to learn something new,” said Megan Coates, a junior Ancient Greek major, when asked to describe herself. Coates attributes this passion for studying other cultures to her mother, an early supporter of her daughter’s academic career and a social worker who shared her experiences of serving different community members with Coates while she was growing up. 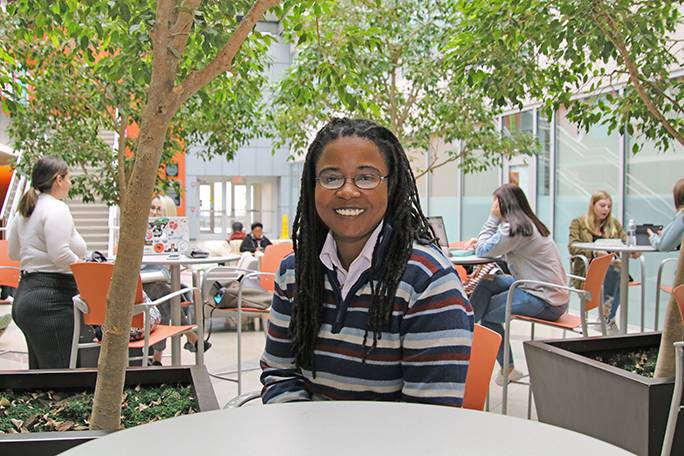 Coates’s path to Stockton and the School of Arts and Humanities (ARHU) was a winding one: a South Jersey native, she grew up ten miles from the University in the uptown neighborhood of Atlantic City but originally studied Music Education at St. Augustine’s University in North Carolina before transferring to Stockton as a Health Sciences major.

During her first semester at Stockton, Coates took a General Studies course, Worlds of Homer, taught by Dr. David Roessel, Professor of Greek, Director of the Stockton Text Center, and Associate Director of the Pappas Center for Interdisciplinary Hellenic Studies. The course’s exploration of the Iliad, the ancient Greek epic poem about the Trojan War, captivated her as a window into the Mycenaean civilization. Subsequent courses such as Beginning and Intermediate Ancient Greek, Mediterranean Music & Culture, and Archaeology of the Mediterranean World led her to change her major to Ancient Greek

After that semester, Roessel asked Coates to become a Text Center intern and travel to Greece in December 2016 with a group of faculty and students. Coates explained, “There was a time when I wasn’t very open. I was always used to saying no” – until she decided to start saying yes to things she normally wouldn’t do, opportunities she normally wouldn’t take. The trip, her first experience abroad, ended up being “the best thing ever” and one of several Coates would go on to take with ARHU.

Coates traveled abroad again in January 2017, this time to Athens and Cyprus to present a monologue on the Ferguson riots that Roessel, who Coates describes as “not the typical Classics professor,” had asked Coates to collaborate on with some other students. The Trump administration’s travel ban went into effect the day the group landed in Cyprus, but Coates recalls feeling like “a burden had been lifted,” when she stepped outside the airport, as well as the warm hospitality shown her by the Cypriot community she met there.

Reverse culture shock and a desire to capture her memories of Cyprus inspired Coates to begin painting the churches and mosques she had visited. “If I could place myself there by painting, then I couldn’t forget it,” Coates explained. The result: a series of 12-16 paintings that Coates will exhibit as her first art show, A Burden Lifted, in December 2018 in Larnaca, Cyprus before participating in an exchange program between ARHU and the European University Cyprus, where Coates will take courses and work in the University’s English language tutoring center. “All of this simply because I decided to say yes,” Coates mused. 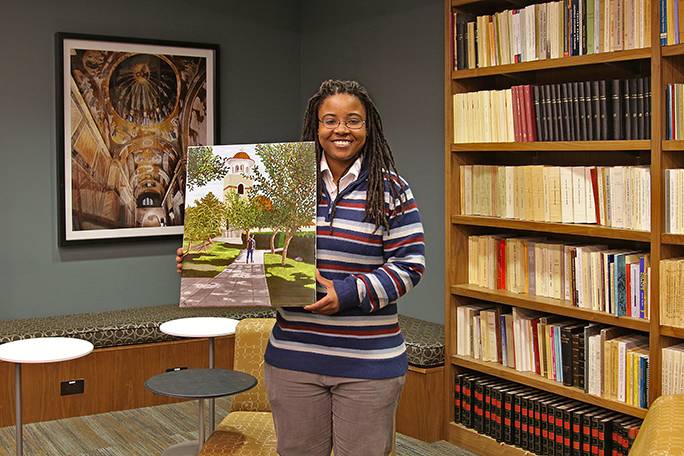 Coates credits several other arts and humanities faculty as important mentors during her time at Stockton: Lucio Privitello, Associate Professor of Philosophy, whose philosophy course introduced her to ancient Greek thought, and Elizabeth Hall, adjunct faculty in Visual Arts and the School of General Studies, who told her she was already writing at a graduate level and encouraged her to further develop her writing skills.

After she graduates in 2021, Coates plans to apply to doctoral programs with the goal of eventually teaching at the college level. “When you have a talent, you have a responsibility to share it,” Coates said. “My responsibility to other people, morally and socially, is to teach.” She is considering philology but leaning more toward archaeology: “I just like people, everything about them, their art, religion, culture,” Coates continued. She loves archaeology because it “shows how everything is connected,” such as the African influences seen in the Greek vases she studied at museums in Nicosia and Athens. “There’s something about the tangibility of physical objects, being able to see and hold the past in your hands.”

When asked what advice she would give to underrepresented students applying to or just beginning college, Coates said, “Don’t put yourself or allow yourself to be put in a box, because when you do that, you limit yourself.” Reflecting on her own path, she concludes, “Do what you love, and everything will fall into place; do what you love, and it won’t feel like work.”