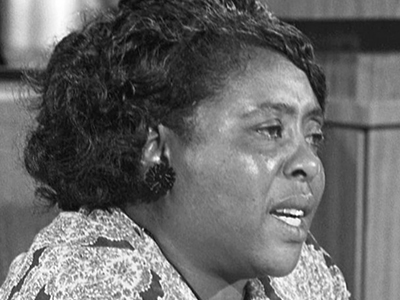 Atlantic City Mayor Frank Gilliam, and Stockton President Harvey Kesselman, will both make brief remarks. A plaque dedicating the room will be unveiled.

The ceremony is open to the public.

Fannie Lou Hamer was a major figure in the Civil Rights Movement, fighting for voting rights for African Americans in her home state of Mississippi and nationally. Her phrase “I’m sick and tired of being sick and tired” was a rallying cry for the movement.

On August 22, 1964, Hamer made history by giving testimony at the Democratic National Convention in Atlantic City in opposition to the seating of an all-white Mississippi delegation. One year later, the 1965, the Voting Rights Act was passed.

Stockton’s Board of Trustees approved the naming in December, 2017. The proposal was developed by Distinguished Professor of Social Work and Africana Studies Dr. Patricia Reid-Merritt and Professor Emeritus of Philosophy and Religion Joseph Walsh.