'Nuttin But A Word' 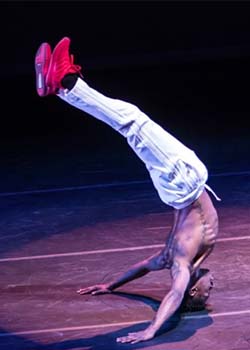 Tickets are $35 for adults with discounts for seniors, children and groups.

Harris, born and raised in North Philadelphia, has been compared to dance legends Alvin Ailey and Bob Fosse. He was awarded three Bessie Awards, three Alvin Ailey Black Choreographers Awards, an Ethnic Dance Award, the Herb Alpert Award in the Arts for choreography and was nominated for a Lawrence Olivier Award (UK).

Harris received a “Philadelphia Rocky” award, Governors Artist of the year Award and the USA artist award for choreography and voted one of Philadelphia’s Creative Ambassadors in 2010.

Harris has toured Egypt, Israel, Palestinian territories and Jordan in 2012. and surrounding countries as one of four Ambassadors for the United States as part of former President Barack Obama’s cultural exchange program.