Hammonton, N.J. - The Noyes Museum of Art at Stockton University Kramer Hall presents “City of Hope: Resurrection City and the 1968 Poor People’s Campaign” on display from Feb. 15 - May 9. 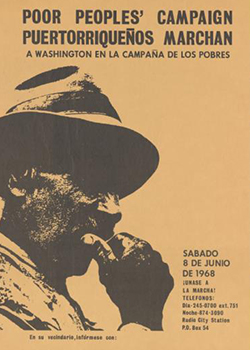 The poster exhibition examines the Poor People’s Campaign—a grassroots, multiracial movement that drew thousands of people to Washington, D.C. For 43 days between May and June 1968, demonstrators demanded social reforms while living side-by-side on the National Mall in a tent city known as Resurrection City.

Organized by the Smithsonian Institution Traveling Exhibition Service (SITES) in collaboration with the National Museum of African American History and Culture, “City of Hope” highlights a series of newly discovered photographs and an array of protest signs and political buttons collected during the campaign.

Stretching 16 acres along the National Mall between the Lincoln Memorial and the Washington Monument, Resurrection City housed 3,000 protesters with structures for essential services like sanitation, communications, medical care and childcare. It included a dining tent, cultural center and a city hall along the encampment’s bustling “Main Street.”

The Poor People’s Campaign marked an important moment in U.S. history and set the stage for future social justice movements. Within months after Resurrection City’s evacuation, major strides were made toward economic equality influencing school lunch programs, rent subsidies and home ownership assistance for low-income families, education and welfare services through the Bureau of Indian Affairs, and more.

The City of Hope exhibition is open to the public during Kramer Hall hours, Monday and Thursday from 8:30 a.m. to 8 p.m. and Tuesday, Wednesday and Friday from 8:30 a.m. to 5 p.m. Kramer Hall is located at 30 Front St. in Hammonton. Face coverings are required and social distancing protocols are in place.  A virtual exhibition will also be available on the Noyes Museum website at noyesmuseum.org.