Alumna Chelsea Shields’ passion for marine science has led her to meeting the sea’s biggest predators. 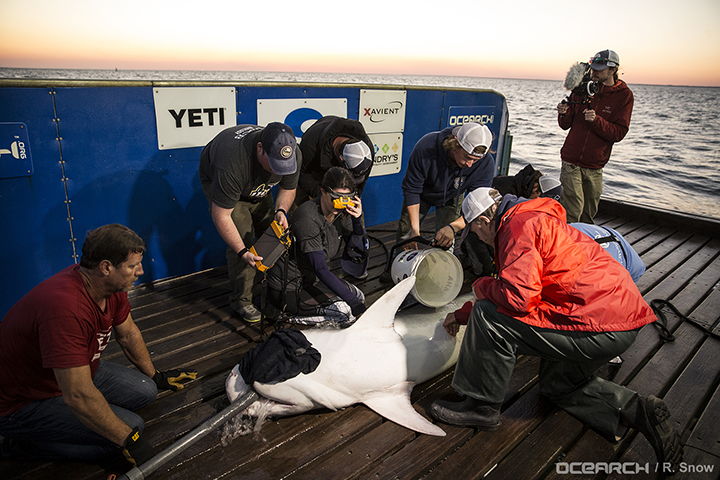 “Agigantic splash interrupted our meeting. That was Hilton,” said Chelsea Shields ’15, describing how she met a 12.5-foot, 1,326-pound great white shark off the coast of South Carolina in March.

Shields and the rest of the crew members of the Lowcountry Expedition were discussing the day’s logistics on board the M/V OCEARCH, an at-sea laboratory that tags the ocean’s apex predators, when the nearby tender boat caught the shark on a hand line.

The eruption of seawater was displaced by the largest mature, male white shark tagged by OCEARCH in North Atlantic history. OCEARCH is a global shark tracking organization that works with scientists worldwide to provide them 15 minutes of access to sharks, which is just enough time to perform up to 12 research studies while minimizing stress on the sharks.

With all of the adrenaline, “it doesn’t feel like 15 minutes,” Shields said. “The whole experience is euphoric.”

Shields assisted in collecting a semen sample from Hilton, which is the first-ever sample from a great white shark.

Hilton wears a smart position or temperature (SPOT) tag on his dorsal fin, which provides real-time updates on his whereabouts.

Shark pings add pieces to the puzzle of shark movement and migration and offer insights into mating, breeding, feeding and nursery sites, which were previously mysterious. 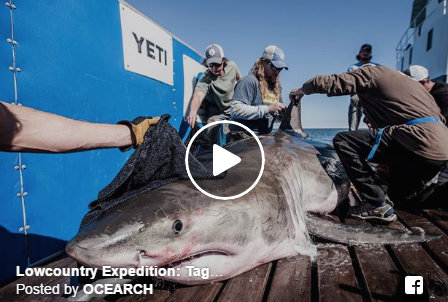 There are still many unanswered questions about shark behavior, Shields explained.

More excitement surfaced, when Weimar, a 304-pound, 9.4-foot male tiger shark, was caught on the same day, shortly after Hilton.

Great whites are cold water sharks while tiger sharks prefer warm water. Catching both species on the same day in the same location was a surprise, due to their differing temperature preferences, explained Shields.

Since March 3, Hilton has zig-zagged offshore from Hilton Head, his namesake and where he was tagged, swimming north to the coast of North Carolina. Weimar’s zig-zags take a more southerly route to the warmer waters of Florida.

After graduating from Stockton with a Marine Science degree in 2015, Shields began studies as a graduate student at the University of North Florida where she is studying stingray reproduction using ultrasounds and hormone analysis. This March was her second OCEARCH expedition. Last year, she went offshore of Jacksonville, Fla. where she performed an ultrasound on a blacknose shark revealing six babies and their zipper-like vertebrae. 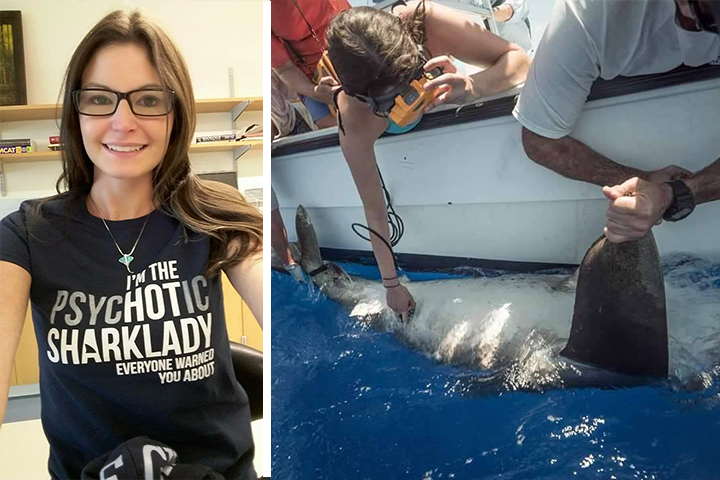 “I fell in love with research at Stockton,” said Chelsea Shields ’15, who has participated on two expeditions with OCEARCH, an at-sea laboratory that tags the ocean’s apex predators.

Shields grew up visiting aquariums across the country on road trips with her father, which deepened her interest in the marine world, preparing her for the day she would meet a shark up close.

Her first close encounters with sharks started while she was an educator for the Atlantic City Aquarium, a job she held as a student at Stockton. The experience taught her how to talk underwater with the help of a microphone while swimming with sea predators during feeding demonstrations.

“I fell in love with research at Stockton,” said Shields, noting her hands-on experiences mapping a shipwreck and learning how to use survey instruments such as multiband sonar and a remotely-operated vehicle (ROV).

Not many people can say they know what it feels like to stand beside one of the ocean’s most majestic and misunderstood creatures. Shields not only knows the feeling; she is part of the science aimed at demystifying a fish often feared by beach-goers.

Editor's Note: Since this story was published, Chelsea Shields earned a master’s degree from the University of North Florida and will begin teaching biological and environmental science courses this fall at Surry Community College in North Carolina. "I'm super excited to get started and can't wait to teach some of the field techniques that I learned at Stockton to my own students,” she shared. Her master’s research answer many questions about the reproductive cycle of tiger sharks.

Visit the Global Shark Tracker on the OCEARCH website to track the whereabouts of sharks including Mary Lee off the Jersey Shore.