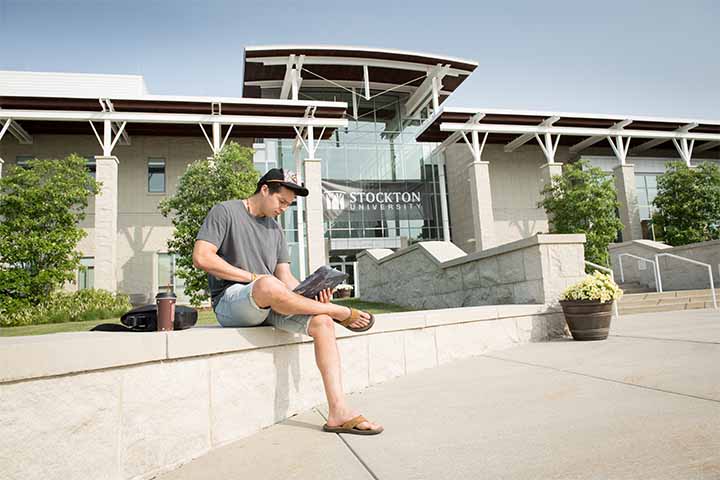 The Campus Center offers several spots to meet up with friends or study before class, including this sweet spot right outside the entrance which offers a great view for people watching. | Photo by Grant Gibson for Stockton University

M egan Davies and Xiomara Corrales remember walking into the Campus Center as prospective Stockton students and feeling both impressed and welcomed.

Both Davies and Corrales were hospitality majors and student workers at the Campus Center. They returned in March for an informal, pandemic-delayed 10-year reunion celebrating the opening of the Campus Center for the 2011-12 academic year and Stockton’s 50th anniversary.

“I remember this room when I came to visit in high school,” Corrales ’15 said of the large Event Room where the reunion was held. “I really liked it here.”

The Campus Center has LEED® Gold certification established by the U.S. Green Building Council and verified by the Green Building Certification Institute (GBCI). LEED, which stands for Leadership in Energy and Environmental Design, is the nation’s preeminent program for the design, construction and operation of high-performance green buildings.

The $65 million, 154,000 square-foot Campus Center is still impressive – and it was meant to be. Its goal was both to serve as the anchor building for what would eventually become the Academic Quad and a central hub for students and student services.

At the building dedication, then-President Herman J. Saatkamp called the Campus Center a “front door” for Stockton and a “gathering place for our students, faculty, staff and community.”

The Admissions Office is conveniently located near the entrance to the Grand Hall, where guests are greeted by the impressive fireplace and four murals painted by Stockton Professor of Art David Ahlsted representing the four seasons in the Pinelands.

The nearby Campus Center Store, operated by Follett, features all things Stockton, from branded clothing to school supplies and car magnets, plus snacks and gift items.

All offices related to student services - financial aid, bursar, registrar, career services, and student development - are together in the one building.

A copy of the Stockton seal is embedded in the floor of the Campus Center Grand Hall. The building was constructed before Stockton earned university status, so it still has the college designation.

As a social hub, the Campus Center houses the food court, coffee house, and game area for students. The 8,800-square-foot event room and theatre serve both student programs and public events. Five smaller rooms host meetings and more than 20 student organizations have offices on the second floor. The center also houses the Stockton WLFR radio station and the Stockton television station.

The Center has been well-utilized.  According to data compiled by the Office of Event Services and Campus Center Operations, over the past ten years, there have been 214,983 event-related facility bookings on the Galloway campus. Of that total, 18,835 occurred in the Campus Center. More than 70,400 customers have had their questions answered at the Information Desk, which is often staffed by students.

The fireplace was designed by Washington D.C. artist Larry Kirkland and inspired by Stockton's educational mission of lifelong learning. Each etching on the fireplace has a meaning that relates to the curriculum, community and campus. There are 23 etchings, ranging from the Osprey to the artist's own heartbeat. Take a virtual tour of the fireplace!.

“There was never a dull moment working there,” said Kevin McCann ’21, a marketing major.  “You met a lot of interesting people, and it really helped with communication skills.”

While the students never knew Stockton before the Campus Center, some current and former employees recall what it replaced, which made it even more impressive.

“All of us in student services were spread out in N and G wings,” said Joe Lizza, a former associate director for Event Services and Campus Center Operations, who worked at Stockton from 2007-2019. “It was very disconnected. We held events in the cafeteria.  It was very exciting to see the support there was for this building.  And it really did increase what we could do for students and enhanced campus life for everyone.”

Executive Director of Event Services and Campus Engagement Laurie Griscom said the Campus Center is an inviting place for the entire Stockton community and their guests.

“And we are the engine room, the magic behind the curtain,” Griscom said of the event services staff. “Our mission is to ensure events run efficiently.”

While the building is impressive, the students and employees said it is the people who make it a great place to work and hang out.

“I really became who I am working there,” said Nancy Ayala ’21, a health sciences major. “Everyone was so friendly I was able to be myself.”

Lizza said the Campus Center created a “center” for the campus both physically and socially.

“It’s a hub for student life, and that’s exactly what it’s supposed to be,” Lizza said.