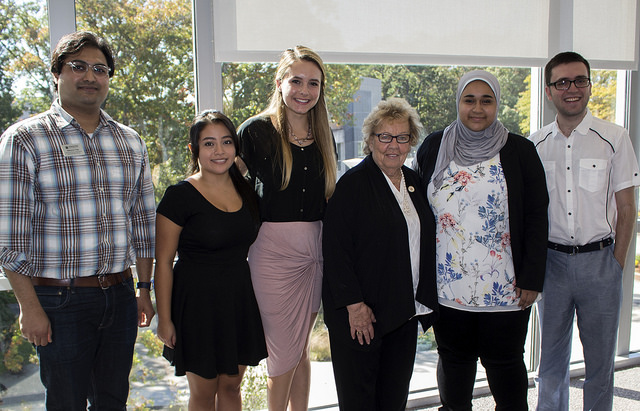 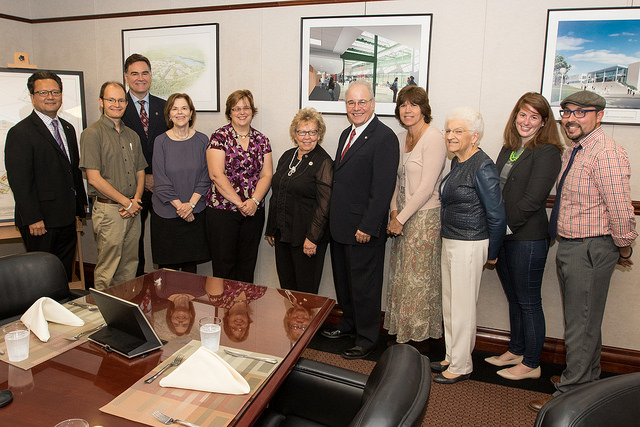 This article originally appeared in the Stockton Press Release on October 21, 2016.

Sen. Weinberg, a Democrat, represents the 37th Legislative District in Bergen County and serves on the Senate Judiciary Committee. She is one of the lead legislative investigators of the “Bridgegate” scandal concerning lane closures at the George Washington Bridge. She served in the state General Assembly from 1992 to 2005 before being moving to the Senate.

“The legislator-in-residence program exposes students and the Stockton community to real-world politics and how issues are addressed in New Jersey,” said Sharon Schulman, executive director of the Hughes Center and special advisor to the president. “Students ask questions of the legislators and get candid answers.

“The program also shows state government leaders why Stockton is so distinctive and illustrates the important role the university plays in higher education,” Schulman said.

During her visit to Stockton, Weinberg took a tour of the Campus Center led by Dean of Students Pedro J. Santana and toured the Sara and Sam Schoffer Holocaust Resource Center with Director Gail Rosenthal. Weinberg met over lunch with Stockton President Harvey Kesselman, Executive Vice President and Chief of Staff Susan Davenport, Provost Lori Vermeulen, Schulman, other administration leaders and members of the faculty.

The senator spoke in several classes, connecting with Stockton students on a variety of topics.

She repeatedly urged students to vote and get involved in the political process. She noted that her legislative accomplishments – laws that banned smoking indoors, lowered the legal blood- alcohol level in New Jersey to 0.8, and forced insurance companies to cover hospital stays of up to 48 hours for new mothers – came about largely because of help received from activists and advocates.

“Being a politician shouldn’t be the goal,” Weinberg told members of Stockton’s Student Senate. “What you need to figure out is how to use politics to achieve your goals.”

In addition, Weinberg was briefed by Senior Fellow Darryl Greer of the Center for Higher Education Strategic Information and Governance (HESIG) about his research on higher education and visited the Stockton Polling Institute, meeting with John Froonjian, senior research associate at the Hughes Center, who organized the legislator-in-residence program, and student polling interviewers.