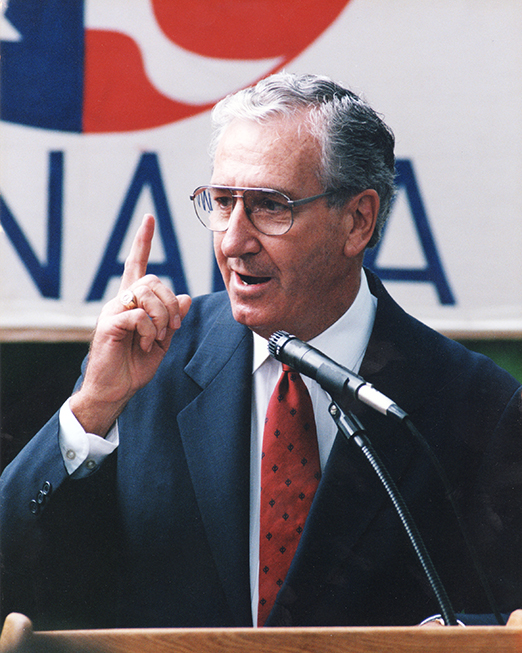 The Center is named in honor of U.S. Ambassador William J. Hughes, who passed away on Oct. 30, 2019. A native of southern New Jersey, Ambassador Hughes lived in Ocean City, NJ, where he and his late wife Nancy were married for 61 years and raised their four children. A public servant for over 50 years, Ambassador Hughes was dedicated to the prosperity and freedom of the American people.

Prior to his election to Congress in 1974, he was president of the law firm of Loveland, Hughes and Garrett in Ocean City. He then served for 10 years as First Assistant Prosecutor in Cape May County and established a record of never being reversed on appeal.

Throughout his career Bill Hughes sponsored numerous projects and initiatives to create jobs, protect the environment and improve the quality of life in southern New Jersey. Serving in the U.S. House of Representatives for two decades and under five presidents, he was a prominent leader as Chairman of the House Judiciary Subcommittee on Crime, House Aging Subcommittee on Retirement Income and Employment, and later the Judiciary Subcommittee on Intellectual Property and Judicial Administration.

As Congressman, Bill sponsored legislation to prohibit ocean dumping, protect our beaches, and enhance the region’s tourism industry. He wrote laws that forced every industrial dumper out of our oceans, banned ocean dumping of sewage sludge, and led the fight against ocean incineration of toxic wastes. Bill coauthored the historic legislation that established NJ’s Pinelands National Reserve and spearheaded the efforts that led to the National Wild and Scenic Rivers designation of the Manumuskin and Menantico Rivers.

He co-founded the South Jersey Economic Development District and won approval of a program that established the nation’s premiere aviation test and evaluation facility in South Jersey. This facility was renamed the William J. Hughes Federal Aviation and Aeronautics Technical Center. Bill helped develop a new port in Salem that was designated a U.S. port of entry and helped establish the first Foreign Trade Zone in South Jersey. He secured funds to build five new industrial parks, a federal prison, a marine research laboratory and a new Flight Service Station at the Millville Airport.

Bill was instrumental in restoring rail passenger service and creating international airport service to Atlantic City – critical building blocks that allowed Atlantic City to re-establish itself as the tourism mecca it is today.

Bill was appointed U.S. Ambassador to Panama by former President Bill Clinton in 1995. During this period, one of his greatest contributions to insure democracy was his direct involvement in the return of the Panama Canal to Panamanian control.