Carol Rittner at the UN 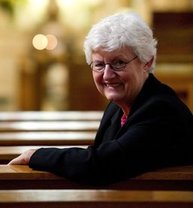 On January 23, 2014, Dr. Carol Rittner RSM, Distinguished Professor of Holocaust & Genocide Studies, spoke at the United Nations program "The 70th Anniversary of the Deportation of the Hungarian Jews during the Holocaust."

On February 5, 2014, she will speak again about the genocide in Rwanda and the question of whether or not churches were complicit in these horrific and tragic events.