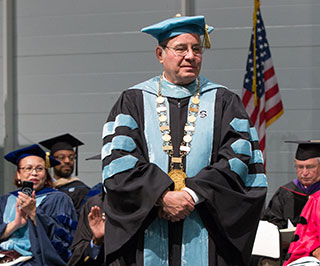 Candidates for graduation who will be participating in commencement should pay careful attention to what Stockton deems appropriate and inappropriate commencement regalia. Please refer to the information below.

Candidates who wish to show their creativity or excitement for graduating may decorate the top of their mortarboards; this is the only ornamentation that is permitted. 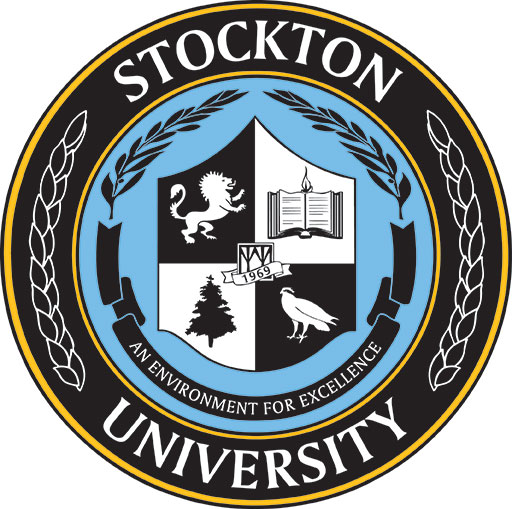 The original official logo of Stockton State College as approved by the first Board of Trustees. The ribbon highlights the year in which the college was established.

This represents courage and strength.

This is a symbol of the enlightenment to be gained through lifelong learning.

This image characterizes the Pinelands locale of Stockton's campus.

Stockton's official mascot, native to our region and saved from extinction through the efforts of Stockton faculty, now names our renowned athletic teams. 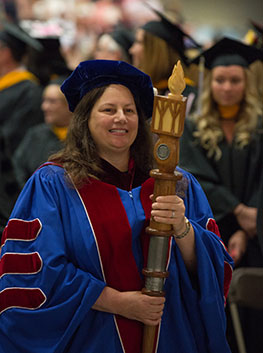 The origins of the mace can be traced to the Middle Ages when knights wielded maces as weapons. As knighthood became obsolete, the mace became symbolic of power. It is now a traditional symbol of authority in churches, government and colleges.

The mace, which is carried by the Faculty Grand Marshal at the Stockton commencement, is the work of Ned Gerber, Port Republic woodcarver who served on the founding committee of the University. The three-foot shaft of the Stockton mace is crafted from walnut and holly, woods which are indigenous to southern New Jersey. The walnut is from a century-old tree hewn by Tom Lang of the Stockton staff. Pewter, the metal employed in our mace, was a popular and practical metal here in colonial times.

Stockton's mace is crowned with the flame of knowledge, carved in holly, to denote mission. At the foot is a carved acorn which indicates growth. Below the flame of knowledge is a triad of Stockton logos, each a twin-treed symbol of environmental concern. Linked edge-to-edge and inlaid with holly, these symbols represent the three elements of the university community: students, faculty, and staff. The Great Seal of New Jersey, cast in pewter, signifies Stockton's aegis and sponsorship. A fluted section of walnut below the State Seal suggests the orderly plan each student chooses in pursuit of his degree and the self-discipline necessary for achievement. Next is a pewter cylinder engraved with the names of Stockton's five presidents. Finally, an engraved pewter nameplate ring identifies "Richard Stockton State College founded 1969." 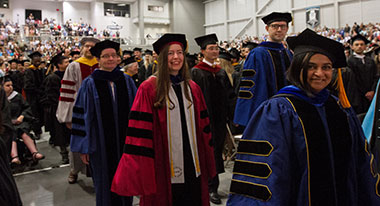 Academic garb dates back to medieval times, when heavy gowns, hoods, and caps were worn by students to protect them against the cold, dank, and drafty corridors of their universities. In the Middle Ages, Europeans wore clothing of distinctive colors to indicate their status or profession. It was only natural, therefore, that when monks and students began to don distinctive costume for bachelor’s (apprentices), master’s (teachers), and doctor’s (teachers who completed postgraduate study) degrees, the most conspicuous distinctions appeared on the hood.

The academic gowns of the past have been replaced by gowns made of lighter fabric, as students no longer wear them to keep warm and since most commencement ceremonies today take place in the late spring and early summer. Typically, commencement gowns are black, although some institutions have adopted gowns in school colors.

The bachelor’s gown, comparatively simple in design, usually has no adornment other than its characteristic long, pointed sleeves. The master’s gown has oblong sleeves, which are open at the wrist. The doctor’s gown differs from the bachelor’s and master’s gowns because it sports velvet panels down the front and around the neck and three velvet bands across round, open sleeves.

The bachelor’s and master’s caps are traditional mortarboard while doctor’s degree caps are eitehr a traditional mortarboard or a soft, large beret called a Tam. Stockton's tassel is black and white for bachelor’s and master’s degrees and gold for doctors. Prior to conferral of a degree, the tassel falls to the right; upon conferral, students switch the tassel ceremoniously to the left.

The hood, as the most distinctive and symbolic piece of the academic costume, indicates the level of the degree, the field of study, and the institution conferring the degree. The length of the hood denotes the degree; bachelor’s hoods are three feet, master’s three and a half feet, and doctor’s four feet long. There are also similar variations in the length of the velvet trimming. This trimming denotes the field of study for which the degree was awarded. The lining of the hood represents the color or colors of the institution conferring the degree. Stockton's Graduate and Undergraduate velvet trimming colors are as follows: