Frank Malatino '10 '15 uses science to help during the pandemic. 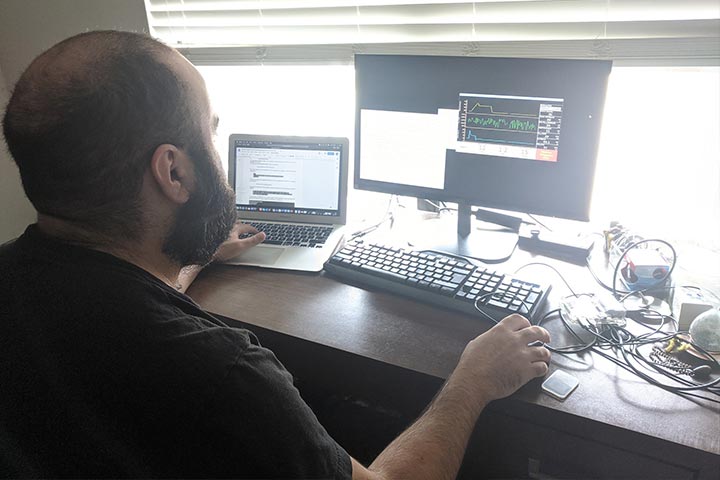 Frank Malatino '10, '15 is working to help interpret software into an instruction manual for an open-source ventilator to help medical staff around the globe. | Submitted photo

As medical practitioners faced a shortage of ventilators during the pandemic, Frank Malatino ‘10, ‘15 worked from his bedroom desk to write a manual for doctors detailing how to set up a new, FDA-approved, open-source ventilator.

The mechanical breathing machine that pumps oxygen into the lungs of patients with respiratory failure was designed by particle physicists in the Global Argon Dark Matter Collaboration out of readily available parts.

When his advisor asked him if he wanted to help with the project, Malatino didn’t have to think twice.

Just before graduating from Stockton with Chemistry and Physics degrees, he said, “I think it’s important that when we get these degrees, no matter what it’s in, we should give back to the society that put us in the position to be able to come here and do this work.”

As a Physics graduate student at the University of Houston, he is living up to his words and using science to contribute to a life-saving initiative.

Malatino is reviewing the software, making sure it works how it was intended and interpreting it into instructions for a manual.

The project’s goal is to make and improve a product that can save lives. The design uses off-the-shelf parts for a do-it-yourself assembly and the open source aspect allows anyone to contribute their expertise.

Although he’s never worked with medical equipment for medical purposes, he is no stranger to the positron emission tomography (PET) scanner that doctors use to detect diseases through imagery.

His particle physics thesis work is using PET scanner technology to build a sensitive detection system to look for neutrinos, which are subatomic particles. “We are looking at what the universe is made of in terms of what makes up the periodic table of elements,” he explained.

He is looking deep into atomic structure to characterize what we cannot sense visually or tangibly. “A neutron breaks down into a proton, electron and an anti-neutrino. That neutrino is going somewhere. Typically, they pass right through us and are very hard to find because there’s no way to accurately make them collide with something,” he said.

“They are notorious for passing through us unnoticed, and we are getting bombarded by them all the time. They’re generated by the sun and come from radioactive decay,” he added.

Malatino is always asking himself why and how.

One of his earliest science memories goes back to third grade. During the afterschool program, he had the option of playing dodgeball, but he chose the model rocket class taught by a retired engineer.

My time at Stockton made me hungrier and left me inspired and wanting to know more."

“Up until that point, a rocket was something abstract. Being able to make something myself that could fly — I didn’t even have the words to describe it,” he said.

Later in his middle school career, he made his own rocket for a science fair project.

The more he learns about science, the more he wants to know. Building a detection system to better understand invisible particles is his current focus after gaining a science foundation at Stockton.

“My time at Stockton made me hungrier and left me inspired and wanting to know more,” he said.

Now, as a teaching assistant, he said, “I try to emulate how the Stockton Physics faculty treated me and create that environment here as well,” he said.

He recalls “Stockton’s pulse of being progressive, accepting and inclusive.”

“In the real world, you have to be well rounded. You have to have that creativity and ability to think on your feet that only comes from being a resourceful person,” he said, adding that a liberal arts education helps people achieve those skills.

The undergraduates he mentors now often refer their friends to Malatino for advice.

Jonathan Tao, who is studying medicine to become a doctor, is grateful for the hours of tutoring that Malatino has spent with him. “Knowing that many of his students were heading to health care fields, Frank related physical theories of heat transfer and electrical conductance to electrophysiology of the heart.”

Tao likens Malatino to Nobel Prize recipient Richard Feynman “in his passion for scientific thinking and ability to communicate to a wide audience.”

When Tao's wife Sarah needed help with her electrical engineering studies, Malatino turned what can look like another language into practical and relatable examples.

"Frank believes that the sciences are for anyone and everyone. His ability to understand complicated concepts and communicate them shows not only his level of knowledge, but his ability to listen to students and desire to help them succeed," she said.

Sarah, who plans to apply to become an astronaut, added that Malatino's passion and immersion into science make him a great teacher.

He has a way of breaking down physics for students to see it as a science that ties together all the sciences and a tool that gives us the ability to observe and find patterns.

Malatino aspires to do research at a national lab and connect people to science through teaching in his future. He plans to follow the path that will allow him “to be a good scientist and citizen and push the world forward while satisfying my thirst for knowledge.”

Learn more about Stockton's School of Natural Sciences and Mathematics.