Historic and Contemporary African American Women
Who Made A Difference

In celebration of Women's History Month, Stockton University Atlantic City presents this exhibition, highlighting a selection of women from South Jersey and icons throughout history...

Carole Byard A visual artist, educator, and member of the Black Arts Movement whose art depicted the spirit and struggle of African Americans Laoma Byrd Owner/Operator of a training facility for world class boxers in Pleasantville N.J. Rosalind Cash Movie, stage, and television actor who refused to play stereotypical roles.

Dr. Jean Thomas Grifﬁn Outstanding scholarship took her from working in the family restaurant business to the upper echelons of the academic world.

Dr. Juanita High Made a difference as a teacher and effective administrator of social programs that beneﬁted the community.

Jarena Lee Born free in Cape May, New Jersey, and the ﬁrst woman authorized to preach in the A.M.E. church.

Amaza Lockett A teacher and musician who served the community through her sorority, church, and Lincoln University
affiliations.

Rosa Parks Refused to give up her seat to a white passenger; her arrest sparked the Montgomery Alabama bus boycott.

Amy Hester Reckless Escaped from slavery in Salem, New Jersey and worked for the abolition of slavery and women's rights.

Harriet Tubman Called "Moses" because she led hundreds of slaves to freedom on the Underground Railroad.

Sara Spencer Washington Her Apex Hair and News Company employed thousands and made her a millionaire.

Sister Jean Webster Beloved by the community for feeding the homeless without regard to the toll on her health
and finances.

Ida B. Wells-Barnett Journalist who wrote about lynching in America, was in the forefront of the fight for suffrage and civil rights, and founding member of the NAACP.

Knowing about history helps us place events into context and make informed decisions about the future, but every voice must be lifted for a true account of events. For many years we learned history from the perspective of the white males who wrote it, and the stories of white women, black women, and black men were muted as was the full story of slavery, Jim Crow laws, and lynching.

In a similar manner, the story of women’s suﬀrage was told by white suﬀragists. Black suﬀragists wanted the right to vote but they also wanted to address issues like equal rights and lynching. They protested and marched with white suﬀragists until they were told to march separately or at the back of white suﬀrage parades. They were eﬀectively erased from the history of the movement in the “oﬃcial,” and universally accepted, History of Woman Suﬀrage written by Elizabeth Cady Stanton. This time, white female voices were lifted up, but blacks were again left out of the story.

The African American History Museum of Southern New Jersey recognizes the need to inspire the youth of our community by telling our stories. We are honored to shine a light on some of the women who have made a diﬀerence in our community. Talking About HERstory is intended to be a “living exhibit” that will continue to grow.

Let’s work together to lift every voice. 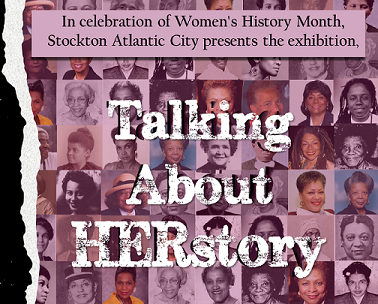